“I have been doing business with Young’s for over 15 years on my personal properties. I am always very satisfied with the level of service I receive from everyone. Shannon in the office is always extremely pleasant and very helpful and the technicians are very thorough and honest. I recently had a service at my business for the first time (with Young’s) and I was very impressed with the work performed by David. He is extremely knowledgeable and a get it done type of guy! He went out of his way to complete the job and assured me I would be completely satisfied. Young’s is very lucky to have a guy like him. That is why Young’s stands out from the rest. I always refer my friends and colleagues to Young’s. Honesty, Great Work Ethic, Great Service, and always Very Reasonable Prices.”


“Middle of a heat wave & called Young’s for help. Very impressed with their turn around during what must be the busiest time of the year for them. It’s been over 105 for a week now! Called when they opened & was put on the list as service call #40 & was told to call back towards the end of the day for an update. I called back & was told it would be tomorrow early afternoon. I explained I was less than two weeks away from having a baby & really hope this would be resolved before the weekend. I got a call back within a half hour that someone would be there in 15 minutes! They diagnosed the problem, it was a quick fix & we just needed a new part. We had the house cooling down in no time! Thankful they were so efficient & empathetic to my situation!”


“When our furnace went out we decided to replace everything and had no idea where to begin or what it would entail. We decided to get quotes from 3 local companies for the furnace and AC because the entire system was over 30 years old. Each company came in with down and dirty quotes to replace the AC and furnace but we were still unsure of what we needed to do. We heard good things about Young’s Air Conditioning so we decided to get a fourth quote which ended up being one of the best decisions we have ever made.

We called and they immediately setup an appointment with Nevada. He inspected our existing system and house layout, then we sat down to discuss some options. He went over each option in detail so that we were able to make a more educated decision. We appreciated the many years of knowledge that Nevada brought to the table as he identified areas in the house that have been problematic and how to best remedy each issue. Young’s offers a process they use to evaluate energy loss in the home with the goal to get the best system for the best price. We decided to do the evaluation before making the final decision. The evaluation took 8 hours and the house was sealed off and pressurized to get the findings. After the evaluation was completed, Nevada provided us with a binder that detailed energy loss from areas such as the ductwork, windows, appliances, doors, ect. After reviewing the report findings and discussing options such as how much insulation was needed, benefits of new ductwork and its layout, various unit sizes and their features it was an easy decision. The crew that did the work were all very professional, took pride in workmanship and their attention to detail was amazing. They took the better part of a week to complete the job cleaning up at the end of each day and yet we hardly know they were there.

We highly recommend Young’s Air Conditioning to everyone for all your HVAC needs.”


“Best air Conditioning service ever! Same day service even when it’s 100 degrees. Technician Robert was professional and thorough. He performed troubleshooting ans was able to accomplish the repair in a timely manner. He went on to do a complete system check and maintenance with a report. I am sitting in total comfort with an hours time!! Highly recommended!!”


“Young came ASAP when my AC stopped working after the 115-degree heat wave. They were here as they promised and all fixed. Charles was awesome!”

Set and Jessica B
Gilroy, CA


“What can I say… Young’s Air Conditioning ROCKS!!! My husband and I have been remodeling our home and used Young’s to evaluate our HVAC system. They told us that it was working fine, but we did have them redo all the duct work and put in new insulation. They were very professional when they came out to check things out. The inspector, Nevada worked closely with our contractor to make sure all work was done in a timely manner.

We are at the end of the remodel and are preparing to move back into our house this weekend and wouldn’t you know, the system is blowing warm air (it’s 100+ outside today)!! So I called the office and they sent a repairman out ASAP.

Thanks Charles and everyone at Young’s AC!!!” 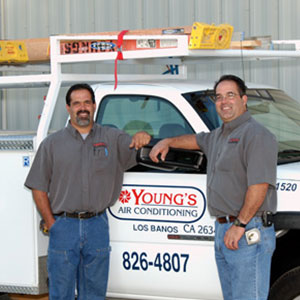 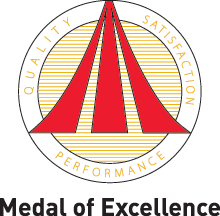